The Start of Spring at RSPB Frampton Marsh

An early start at RSPB Frampton Marsh in Lincolnshire rewarded us with lovely light and fantastic birds including plenty of migrants, although it was a tad warm as we progressed through the day ... not something we were saying a week or so ago!

Migrant Sedge Warblers appeared to be proclaiming their arrival everywhere while the more subdued tones of the resident Reed Buntings were equally welcome. Reed Warblers appeared to be too busy to sing while Common Terns called overhead attempting to drown out the sound of the many mating and nesting Black-headed Gulls. The evidence of their behaviour suggests the Terns will also need to be on their nests soon!

The beautiful Avocets seemed to be everywhere which is a huge seal of approval for those who developed the reserve from agricultural fields less than ten years ago ... however the arguments we witnessed suggests they may now be running out of space.

The only youngster we saw was a single Greylag Goose gosling with very attentive parents ... a delightful ball of fluff! It was also lovely to see good numbers of butterflies and flowing plants.

As with last year, the over-wintering Brent Geese seem reluctant to leave with many large flocks calling and settling on the saltmarshes ... an echo of winter in contrast to the songbirds.

Frampton never disappoints but our first Spring visit of the year in perfect weather conditions was definitely special!

Learn How to Photograph Big Cats 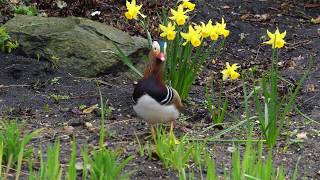 Learn How to Photograph Big Cats

A Visit to RAF Lakenheath

Celebrating the Royal Air Force at 100

The Start of Spring at RSPB Frampton Marsh

A New Home for my Aviation Photography

A Visit to RAF Coningsby